It’s a total pleasure for us to be starting the new year with a new appointment to the OTI Tutor Team!

Jane Fahy graduated from the Online Therapy Institute in 2013 with her Certified Cyber Facilitator qualification, and since then has been hard at work with GamblingTherapy.org as their Clinical Services Manager, a global online service for those affected by problem gambling. She also undertakes face-to-face work with problem gamblers in a residential setting for the Gordon Moody Association, and has been working with this client group for six years.  She is a registered member of the British Association for Counselling and Psychotherapy (BACP).

At OTI, we are always looking to expand our suite of online training courses – this is why our course offerings encompass topics as diverse as cognitive behavioural coaching, handling emotions at work, domestic violence, working with essential oils, and success motivation, alongside our core topics of transferring therapeutic skills to an online practice environment as a coach or therapist.  Inviting Jane to join the tutor team, with her experience as both an online counsellor and a gambling addiction specialist was an obvious choice!

Jane and I look forward to officially launching the course in the coming week or two – it is ten hours of online study over eight modules, self-paced and designed to fit around other commitments, and will teach you how to blend offline and online technologies to reach those affected adversely by gambling and help them on the road to recovery!  Jane will be giving personal one-to-one tutoring to each student in our unique OTI way! 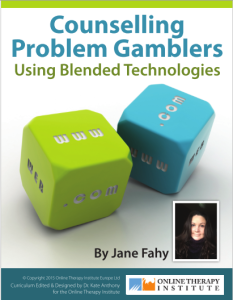 Watch this space for updates, or email jane.fahy@hushmail.com to register your interest!