Avatars and virtual environments have been on my mind a lot lately: we recently relaunched our Avatar Identity Specialist Certificate; I finally got around to finishing the book Infinite Reality; and a recent question to the British Association for Counselling and Psychotherapy on the topic from a colleague led to the organisation making it their research enquiry of the month.  This allowed me to revisit my own writings on the subject, and reflect on past experiences that feed into my thirst for understanding how different technologies fit into the lives of others.

On Sunday of this week, it was my absolute pleasure to join DeeAnna in a shop in Second Life (SL) to choose our new virtual office furniture.  Since our previous SL landlady moved on to other projects and closed her 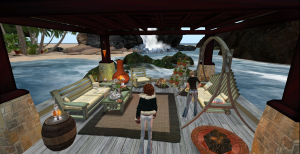 beautiful island, we have been virtually homeless for around six months, both of us feeling out-of-sorts and ungrounded within an important part of our work – the virtual world.  If you have ever been homeless, as I have, you will know exactly what I mean. And if you haven’t, I promise you it’s not exactly a bundle of fun emotionally (quite apart from practically, of course).

To borrow the name of one of my favourite bands, it makes one feel “uncluded”.  I’m not going to exaggerate my experience – it was temporary, during the summer, and mercifully only for a matter of a few weeks – but it certainly gave me an outlook on life that enabled me to understand why people seek communities and environments created by those on the outside of mainstream society.  And what technology has enabled us to do, at least in the developed world, is to seek those out and be part of them virtually.

In our search for a new island in Second Life, I looked at spaces next to graffiti-covered biker bars, got thrown out and banned from a house of a, ummm, shall we say a “private” nature, and gatecrashed a virtual wedding.  I fell into virtual fountain and virtually almost drowned. I met an aardvark who then googled my avatar name and emailed me for therapy. I went to virtual Paris and bought a virtual croissant from a virtual vendor who bizarrely only spoke Spanish. These were interesting experiences, but none of them made me feel included.

So we turned to our dear colleague Gentle Heron, who runs Virtual Ability Island and who had available land for rent – you may remember her from the documentary film Login 2 Life and the feature she wrote for us for TILT Magazine.  We now have space in SL which could have been made for us – a therapeutic community, with a conference centre and cafe for our students to hang out in (office-warming party coming soon!), and a beautiful building with roof garden, library, therapy room, Reiki centre, and TILT’s headquarters .  It’s a work in progress as DeeAnna and I find time to shop together inworld from our offline offices either side of the Atlantic  – but it gets more like our virtual home every day.

I am very used to the odd looks I get when trying to describe the virtual living so many people partake in – it’s why we ask the majority of our students to experience it for themselves as part of their Foundational Course in Cyberculture.  We don’t need to have the same experiences as clients to empathise with them, but we do need to understand how they live.  If the community of the virtual world is where they feel included – rather than uncluded – then who are we to dismiss that as being unreal? 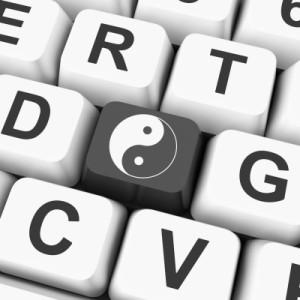